“Not the American one”. This is the quantifier required when you tell people in the UK that you are going to Georgia. In fact, many people don’t even know there is a country called Georgia, despite the fact that it is only half the distance from the UK that the state of Georgia, USA is. So, to clarify, myself, 12 other students and 1 member of staff from the University of Westminster are travelling to the country of Georgia, located on the opposite side of the black sea of Bulgaria, sharing borders with Russia to the north, Azerbaijan to the East, and Armenia and Turkey to the South. This is the area known as Caucasia, where Europe meets Asia. 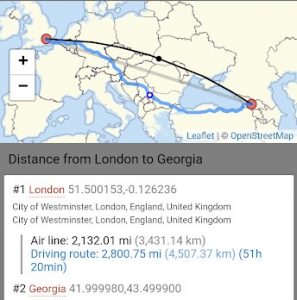 Despite its small size (69,700 sq. km) and population (3.718m), Georgia is of great interest to us as students of Politics, International Relations, and Development. In 2003, Georgia, a former Soviet state, saw a bloodless revolution, known as the Rose Revolution. Given its history as a founding member of the Soviet Union and the home of Stalin, a long history of corruption, civil war and aggression from Russia, the progress it has made is remarkable. Today Georgia is known for transparency and democracy, according to the Georgian Corruption Report and the Corruption Perception Index, which is precisely why we need to find out more about this small but impressive country.

In order to investigate how a country with a troubled past can transform itself, we will be traveling to Tbilisi, the capital of Georgia. We have 5 days and 5 nights to discover all that Tbilisi has to offer. Assisting our education of Georgia’s political landscape will be the St. Andrew The First-Called Georgian University, who will be delivering the mornings meetings. As this is the first expedition to Georgia for the University of Westminster, the assistance of the Georgian University has been gratefully received and will hopefully lead to a long-lasting relationship between the two universities. Also on the educational agenda is a meeting with Transparency International Georgia who have been pivotal in eliminating corruption which was previously rife within all factions of government.

As well as a fascinating political history, Georgia has plenty for us to discover. I hope to have a day trip into the mountain region (a recce for a possible future ski holiday) which is a few hours by minibus from Tbilisi. I am also looking forward to walking tours of the city, taking in the beautiful cathedrals, old town, peace bridge and aerial tramway. So, check back for updates on our Georgian adventures.

Privacy Policy — Ensuring the confidentiality of users' personal data is of high importance to us, all personal information concerning members, subscribers, clients or visitors using our systems will be treated in accordance with the Personal Data Protection Act of 26 October 1998 (Law 67/98 of Brazil). Personal information collected may include name, email, telephone, address, date of birth and/or other. The use of our systems assumes acceptance of this Privacy Agreement. We reserve the right to change this agreement without notice, so we recommend that you check our privacy policy regularly to keep up to date. Adverts — Like other sites, we collect and use information contained in advertisements, such as your IP address. (Internet Protocol), your ISP (Internet Service Provider), the browser used when visiting our sites (Chrome/Safari/Firefox), visit time and pages were visited. Customer Sites — We have direct links to our clients websites, which may contain useful information / tools for its visitors. Our privacy policy does not apply to customer sites, if you visit another site from ours you should read your own privacy policy. We are not responsible for the privacy policy or content on these sites. For more informations, contact us.